Thanks to Janis McDougall for the pics!

Word Rider and her creators feature several times in this 15-minute doc on the Tofino Arts Council’s Boardwalk project, which culminated tonight in the Boardwalk Gala and auction — the toniest event of the season, which raised close to $44,000 for TAC and the surfboard artists of Tofino.

Appearing last Monday evening at a council chamber near us … us!

Yes, a half-dozen members of the Clayoquot Writers Group, after a flurry of preparation, gave a brief poetry reading to the District of Tofino council, in honour of National Poetry Month. 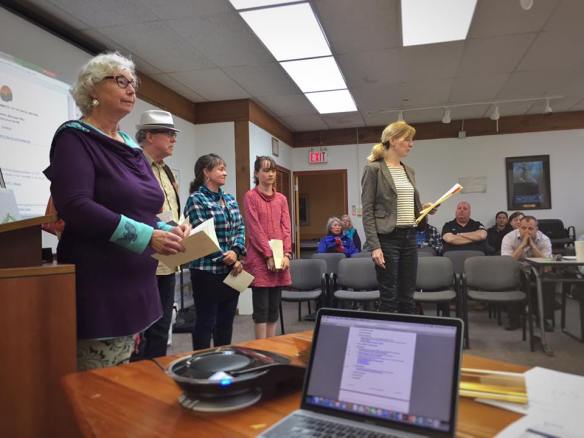 To quote Mayor Josie Osborne (who snapped the pic above):

What a treat to have the Clayoquot Writers Group read poetry in the Council Chambers last night at the beginning of our meeting.

Thank you to Janis MacDougall, Janice Lore (who you can’t see in the photo), David Floody, Joanna Streetly, Toby Thériault and Clodagh McConnell for inspiring us — and for inviting Council to consider a future marriage of poetry and civic discourse through the creation of a Poet Laureate. As we were reminded, one of a poet’s jobs is “to reveal the overarching sentiments of a community to itself,” essential to the overall health and happiness of a living, breathing place.

The reading was to let council, staff and the public know that Tofino’s poets have been quietly keeping a finger on the town’s pulse for years, effing the ineffable about our collective triumphs, tragedies, conundrums and foolishness.

It was also to let council know that we intend to come forward again with a detailed proposal for a municipally decreed, official Poet Laureate of Tofino. From Clodagh’s preamble:

April is poetry month and with that in mind a delegation from the Clayoquot Writers Group is here to make a presentation to council on the value of having a Tofino Poet Laureate.

Poet Laureates originated in Italy in 1315 and have been around ever since across the world. In Canada we have poet laureates from Nanaimo to Ottawa, acting as literary and cultural ambassadors and helping us see ourselves and those around us in ways that go much deeper than a newspaper story or a political speech.

A poet laureate is a poet officially appointed by a government or conferring institution, who is expected to compose poems that reflect their community. This may mean composing poems for special events, or about occasions, triumphant or tragic which happen in the community. 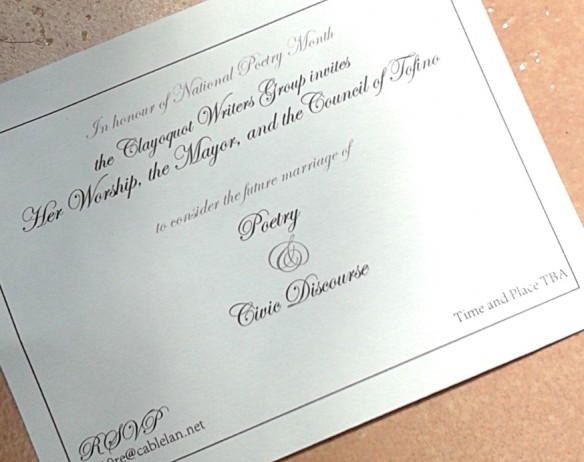 April’s Word Rider poem is by writer, artist and CWG member Ursula Banke (website). Find the Word Rider by the staircase in the Common Loaf Bake Shop, downtown Tofino, across from the post office. 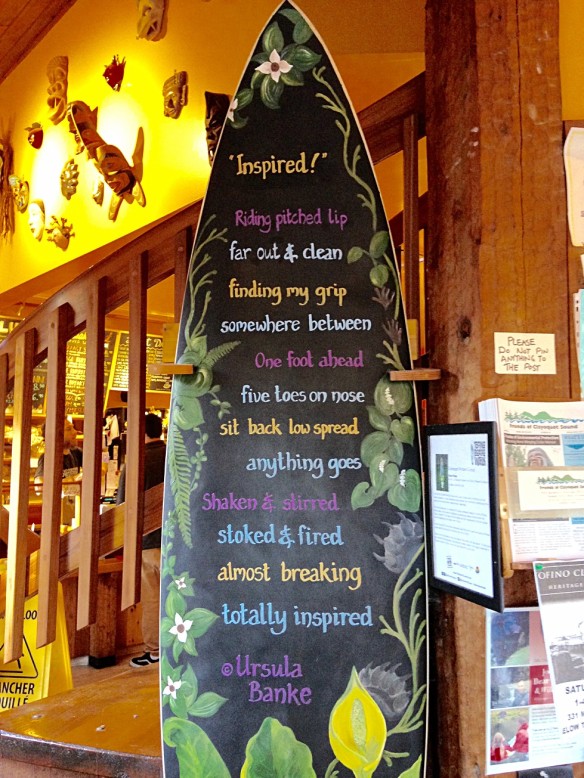 Word Rider is part of Tofino Arts Council’s Boardwalk project — a collection of 20 or so surfboards turned into works of art by a passel of local artists. The project merges the quintessential west coast pursuits of art, surfing and business in a creative partnership to embody our community love of the ocean. The boards will be auctioned off at the Tofino Boardwalk Gala on May 26 (tickets).

The Clayoquot Writers Group (CWG) is a loose conspiracy of writers and poets based in and around Tofino, BC, Canada. Most of us live in the "Writers' Block" near the hospital; a few are Tofino ex-pats. We hold writing workshops, literary events, and meetings to discuss writing, plan events and review works-in‐progress.